The competition for young violoncellists under 16
cs |  en 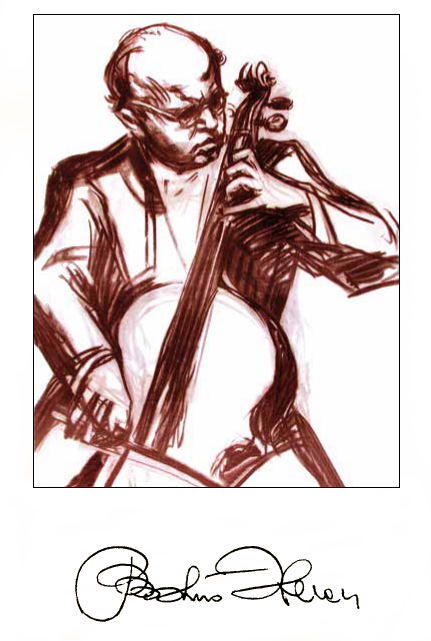 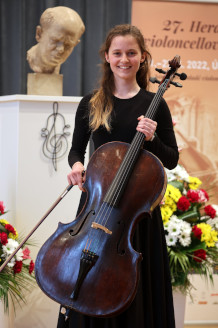 The town of Ústí nad Orlicí announces that 28th Heran Violoncello Competition will take place in person from 19th to 22rd of April 2023 in Ústí nad Orlicí, Czech Republic. More information in here.

The title laureate of Heran Violoncello Competition 2022 for the absolute winner.

The Award from Czech National Radio for the laureate of the competition: Radio recording with Czech Radio.

The Award of Czech Musical Instruments company for the laureate: instrument accessory package.

The Award from Master Jaroslav Kocian Foundation Fund for the laureate of the competition: prize money 5 000 CZK.

The Award from Master Jaroslav Kocian Foundation Fund for the winner in each category: prize money 2 000 CZK.

The Award of František Kinský, the New Chateau owner in Kostelec nad Orlicí and of the KINSKÝ Art Media Agency, for the best competitor of each category from the Czech Republic: an invitation to perform in the Mirror Hall of the New Chateau.

What did not fit in the newsletter

In this category, we witnessed the first concert steps of very young competitors who are a promise for the future. And the promise is great, their talent is already beginning to show.

The winners of the first three awards showed wonderful performances, the winner Aleksandra Maria Tralla was even better. The decisive differences are so slight that the listener does not even have to register them in the concert hall, but a professional expert jury will recognize them. The winner's performance was technically pure with a well-guided phrase.

The performances were slightly different in the second two places, but the differences were so slight that we did not want to rank such young competitors.

I am satisfied with the overall level of the first category. These young cellists can play songs that are technically intended for much older. And some of them, the awarded players, are capable of playing them well in their 10 years. 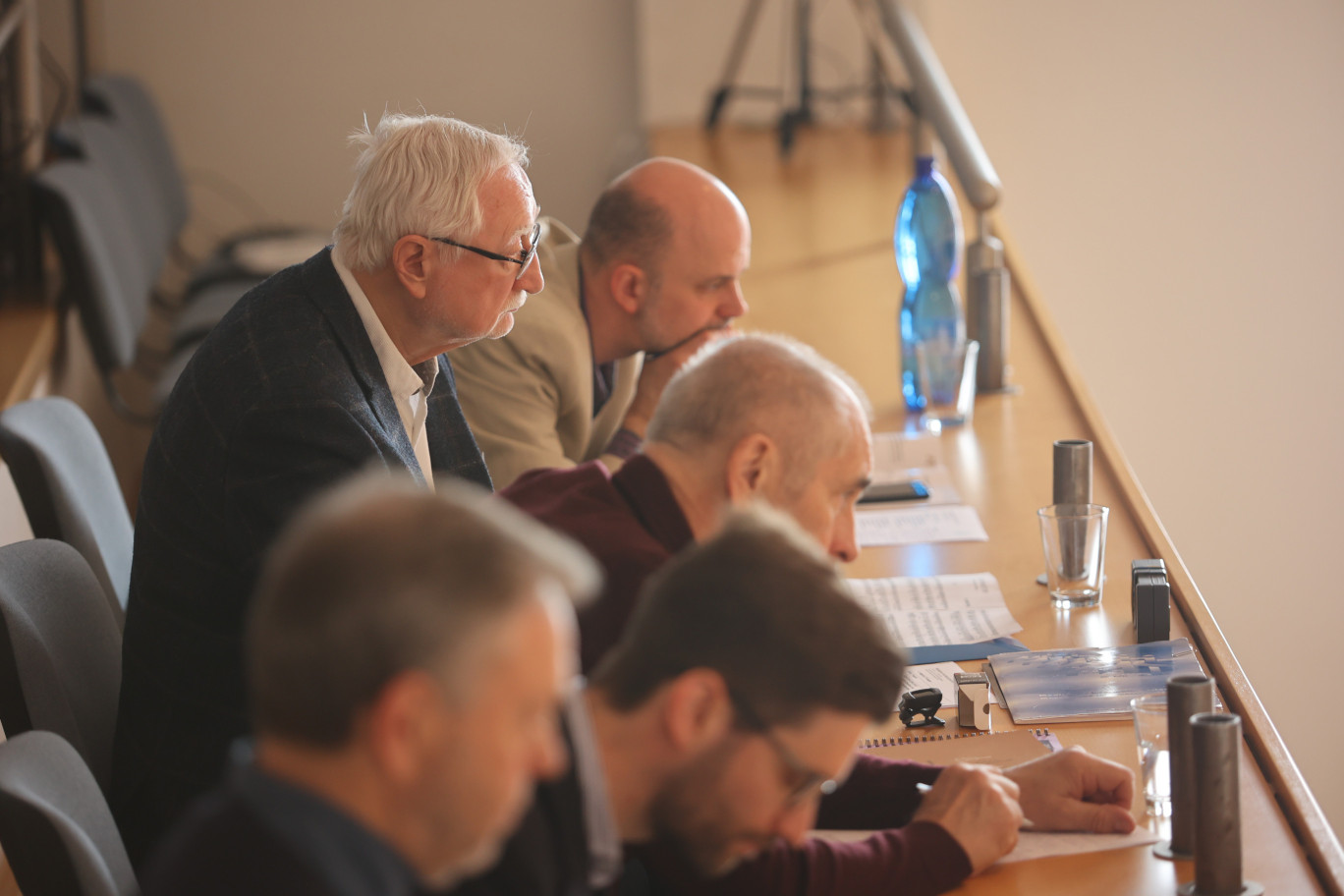 The number of only four competitors in the under-12 category was probably caused by the fact that we came into conflict with the admissions to eight-year grammar schools, which is understandably more important for young Czech cellists.

However, the overall quality did not suffer from a lower number. It was interesting. From the second category, the specialty of the competition begins, to make it harder, there is the obligation to study the selection only from three etudes. These are short songs with a technical focus, the player plays them alone without a piano.

The best performances were balanced, the jury must then decide what value of the game it would prefer. Something little different can affect everyone. I would say the victorious Tobiáš Balkovský was the best in all respects. He made no memorable mistake, had good intonation, and showed the greatest maturity in his art.
Prof. Miroslav Petráš, chairman of the jury, evaluates the 3rd category:

The sovereign performance of the winner surprised me, I already knew her a little, and she has made great progress. Her play was the most convincing for the entire jury. Everything worked out for her, it was enriching to listen to the young artist and the unanimous agreement of the jury.

Of the nine participants, only one was from Germany, and she won the second prize, again excellent level. For divided second and third prizes, performances are always evaluated as comparable.

The third category against the first shows a significant leap that young artists will make between the age of 10 and 14. This is admirable, the performances of candidates from the third category are generally more mature, tonally more filled with beauty and meaning. Overall, I have to say that the competition is developing beautifully after the first day. 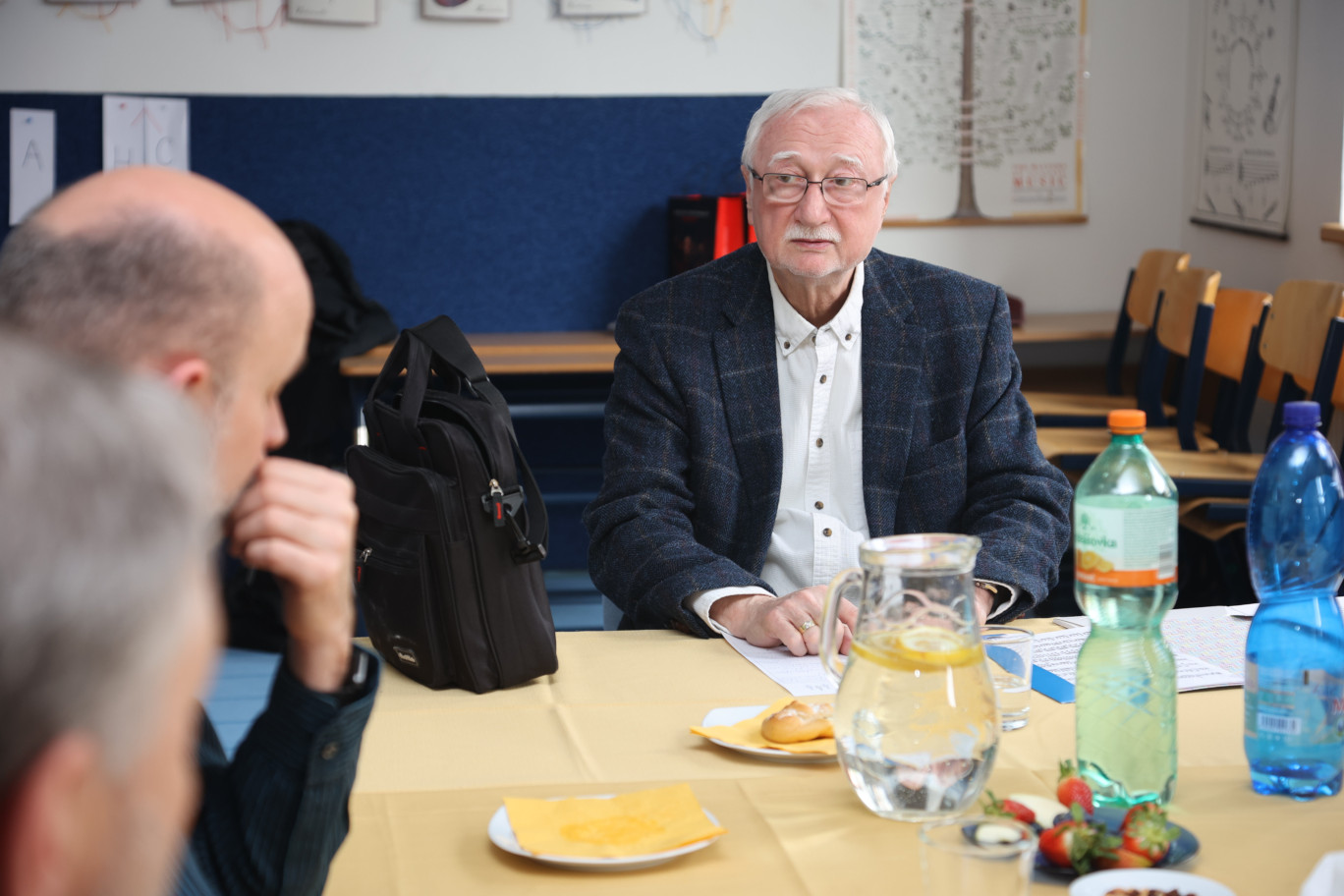 The level of the oldest category was excellent, as it usually is. For us, these competitors are already adults in the context of the competition. For a concert artist, of course, it's still a young age.

The jury in this category perceives not only professional play but also thinking. And when this comes together, the contestant is convenient manually, has a beautiful tone, intonation, there is usually a musical sense, then it's beautiful. That applies to prize winners.

As for the third ones, the concept of the Korean contestant was softer, sometimes more vocal in the mandatory composition, Variace na slovenskou píseň by Bohuslav Martinů. On the other hand, it seemed more forceful by Jan Petrov.

Among other things, the chosen repertoire played a role in the second prize. Nadia Boulanger and her songs rarely appear in similar competitions, but the Mongolian cellist Enerel Lkhaasuren came with her. It was a wonderful experience, it is a very technically demanding song, and she managed it brilliantly.

For the winning competitor, who also won the laureate title, I would like to warn in advance that I am her teacher. In accordance with the rules of the jury, I would not evaluate in such a case, the other jurors would submit their evaluation, after adding up the points, an arithmetic average will be created, which is included in the evaluation. Once the scoring of all competitors is completed, then I chair the discussion from the position of the chairman of the jury. According to colleagues, Júlia Sofia Nagyová convinced by her beautiful sound color and wonderful intonation. From the teacher's point of view, I state that her performance was excellent, she played her maximum.
Prof. Miroslav Petráš, chairman of the jury, evaluates the whole competition

In the case of competitions for beginners and young artists, it is fairer, in my opinion, for them to be held in person. There are many factors to deal with, including stage-fright. With regard to time possibilities, the number of participants around forty is optimal. This year's thirty-three was a good number from the point of view of us jurors. And most importantly, the success of the performances was excellent overall. I experienced in each competition that one or two competitors had a bad day, and this year it did not happen to us! After about two years of "homeoffice", they all were looking forward to the public performance and the beautiful hall. Heran's competition has an experienced organizational system that works, and that's a great feeling. The expert jury found an agreement, and the debates dealt mainly with the division of some prizes, which I personally favor. 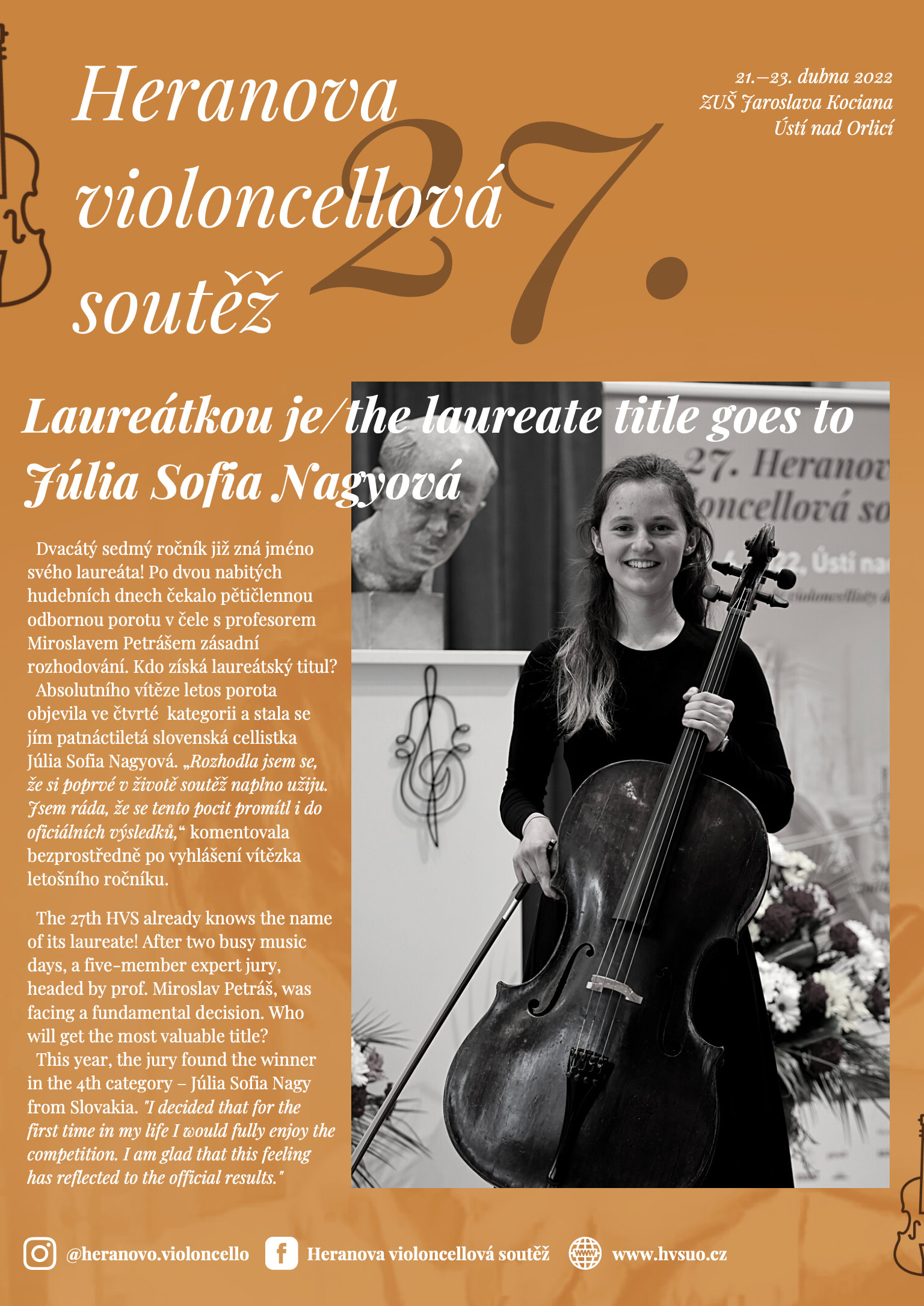 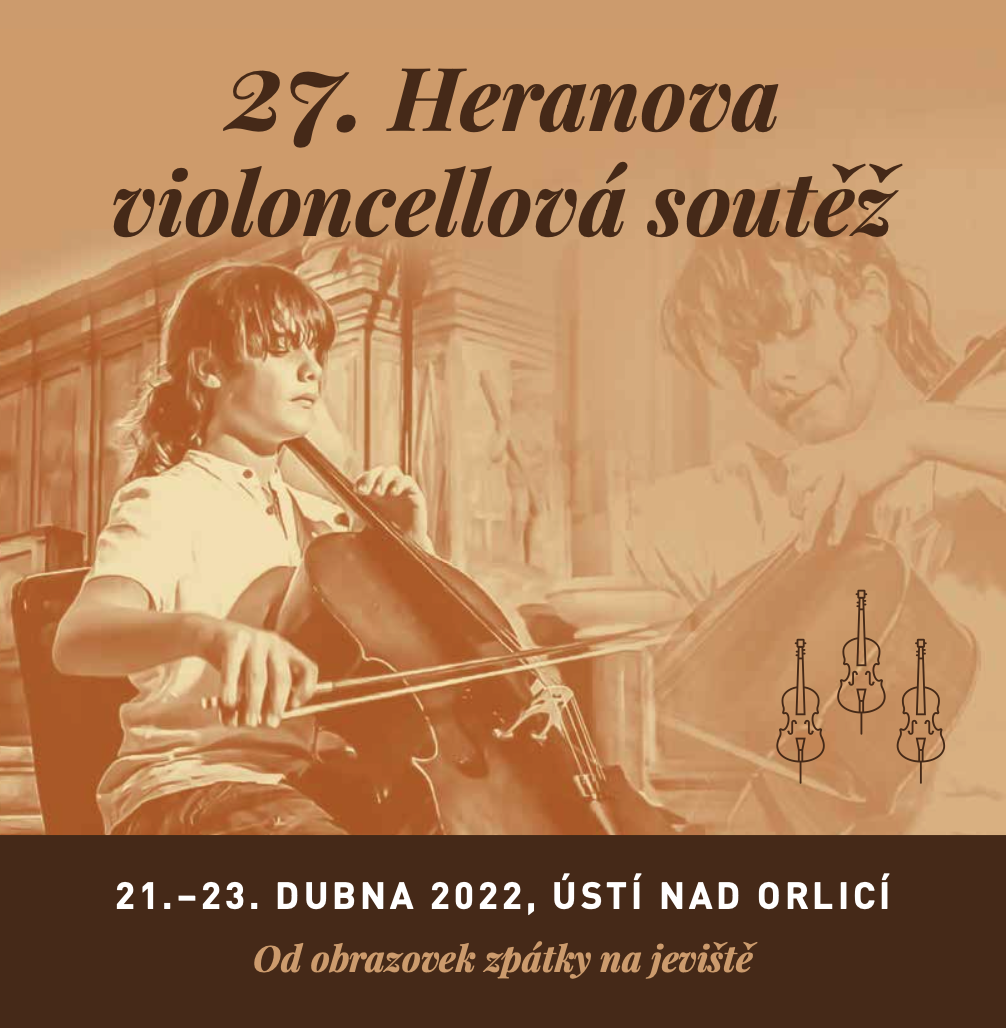 Swedish Czech cellist Mikael Ericsson will replace Prof. Marek Jerie on this year's jury, as Prof. Jerie has a concert commitment for the competition days. I wish Marek Jerie a lot of success not only in concerts, and I am very happy to welcome Mikael Ericsson to the Heran Cello Competition, I look forward to working with him and wish him a great experience of meeting young musicians.

After deadline of suBmitting the entry form

Dear friends of the cello,

I am pleased to announce that we have received 35 entries for the 27th Heran Violoncello Competition. I am very pleased that despite the unfavourable situation in the world, we will have the honour of welcoming 7 competitors from abroad, namely from Slovakia, Slovenia, Estonia, Germany and Mongolia, to the birthplace of Bohus Heran. 28 competitors are from the Czech Republic and are proof of how popular the cello is in our country.
Due to the lower number of entries, we are shortening the competition from 21 to 23 April. However, I believe that the high quality of the competition will be maintained. One novelty this year is the Children's Jury and their evaluation of the competition performances.
I wish you all good luck in your preparations. After last year's event, which was held only remotely, we are looking forward to meeting you in person in Ústí nad Orlicí even more.

Saturday, April 23
10 a.m.       Meeting of the Mayor with the winners and foreign contestants at the Hernych Villa
2.30 p.m.    Concert of the winners at the Music school

I would like to address you about the horrible war in Ukraine that we are all witnessing now. While doing all we can to help people coming from Ukraine or those staying there, we are determined to live our life as normally as possible. That is why we are still planing to make the competition in person in Ústí nad Orlicí. We feel that it is important for our children to go back to normal life after living with COVID restrictions for such a long time. Our government is stable and competent and we can rely on them to maintain stability in our country. The situation in the Czech Republic is calm now and we firmly believe that it will stay like that in the future.

Surely, none of knows what the following weeks and months will bring, but we want to hope for the best.

We don’t take the situation in Ukraine lightly and don’t want to be naive, but we still want to give our children as normal life as possible.

Of course, safety is our first concern. Were the situation to change for worse (however we are all hoping for it to be over soon for the sake of Ukrainian citizens) we would move the competition online. But at this point we are preparing everything here in Ústí and we are looking forward to see all of you on our stage again.

Thank you and good luck with preparations for the competition,

Dear competitors and visitors of the Heran Cello Competition,

Let me inform you about the new developments in the preparation of the 27th year of the competition:

The smaller number of applications so far indicates that the competition days will be shortened from Thursday, April 21 to Saturday, April 23, 2022.

Preliminary schedule of the competition:

9.30 Drawing of lots for 1st category

8.30 Drawing of lots for 2nd category

10.00 Reception of foreign participants and guests by the mayor

14.30 Concert of winners and prize-giving ceremony

The schedule is tentative at the moment and its final version will be announced after the application deadline on March 10, 2022. We are accepting applications until then.

If you don't have your own piano accompaniment, you can contact Mrs Hana Forsterová, an experienced pianist and accompanist from the Prague Conservatoire, e-mail: hforster@post.cz

We wish you good luck in your preparation and we look forward to seeing you in Ústí nad Orlicí.

On behalf of the organizing team